Details about the custom Mission War for this server.

Mission War is a capture-the-flag type game that pits up to 100 players against each other in a single arena. Generally the nation that uses the best teamwork wins. Players are usually effective only in groups of 3 or more.

Quick instructions if you are a newbie to Mission War:

Your character must be at least level 170 and be aligned with either the Procyon or Capella nation.
You can change your character nation in Character Panel here. or by accepting the Nation Quest from Morison (Officer) in Port Lux.
Your character must must pay an entry fee of 15.000.000 Alz

All players enter the waiting lobby before entering the arena, Tierra Gloriosa.
Players wait in the lobby with the countdown timer initially at 5 minutes.
There are 3 NPCs located within the Lobby which provide the following services:

The team that scores the most nation points in 45 minutes wins.
Team points are scored primarily by building towers, capturing bases, by defeating the bases' Legacy Guardians.
The game can end before 45 minutes is up if one nation captures all the bases. This is a called game.

There are 13 bases in Tierra Gloriosa: Defeat a base's Legacy Guardian to allow base capture
Capture the base by clicking on the Legacy Barrier.
When you capture a base the following will happen: After your nation owns the base, Force Towers can be built. 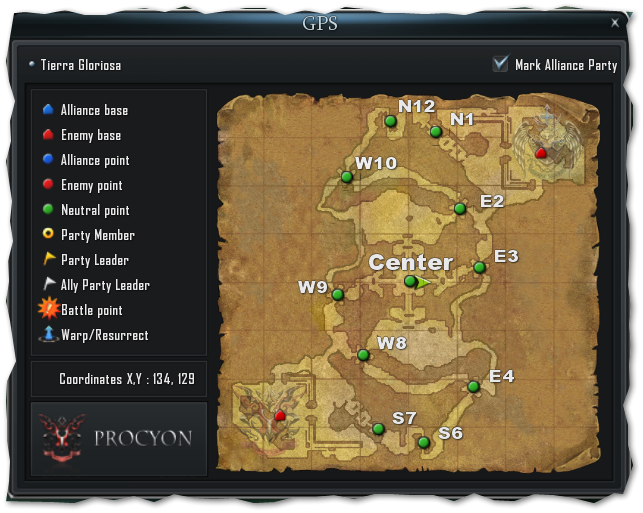 Once a week, the result of the last Mission War will determine which nation receives the Nation Bonus. This war is known as Bonus War
All members of the nation that win Bonus War receive the following bonus for the next seven days:

Every Sunday at midnight the top 30 players from both nations will receive and reward for the acummulated score during the War held in the current week.
Mission War current ranking list and previous week ranking list can be visualised here.

Please take a moment to review the rules detailed below.


If you have read, understood and agree to these rules and our Terms of Service, you may use our Web Sites and Services.

Please take a moment to review the rules and conditions detailed below.


If you have read, understood and agree to our Server Rules along these rules and conditions, you may use our Web Sites and Services.